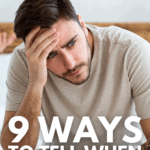 When it comes to the Taurus Man, he definitely isn’t the type to wear his heart on his sleeve or verbally express his emotions unless you have been a trusted member of his circle for some time. This stoic nature is exactly why it can be hard to know when the Taurus Man is happy, angry, or hurt. He won’t be expressing his feelings through spoken words but the little actions he’ll do will be enough to let you know he’s hurting when something has upset him.

If the Taurus Man has been in your life for quite some time and you both have shared numerous discussions on a wide variety of topics from the lighthearted to the in-dept, then he definitely has placed some solid trust in your relationship and connection. But all of a sudden, he goes completely silent on you, he doesn’t respond to messages (regardless if you text, email, or call), and he doesn’t seem to want to engage in any dialogue. This is how he acts when hurt but is also in love.

The reason might not even be related to your relationship as the Taurus Man is known for retreating inside his shell when he is working through something but at the same time, he isn’t the type to take it out on those around him unless they are involved in some way.

2. He is acting cold

The Taurus guy never comes across as warm and open to someone that they don’t know but he definitely doesn’t exhibit these behaviors around those that are in his circle. This means that if the Taurus Man is suddenly acting cold and distant with you – he is not impressed with something you said or done.

The thing to look at, however, is whether or not he has completely removed himself from your life. If he doesn’t respond to anything you send, you can’t get him to have an actual conversation with you, or something similar – then he is beyond hurt and he is done with your relationship. If he is responding, just colder than before (and quieter – see #1) – then he is hurt.

3. He is spending less time with you

During those occasions during which it is hard to get the Taurus Man to spend time with you; you really have to ask yourself if there was anything that was said (or done) that could have been taken the wrong way by him and now he is hurt to the point that the thought of spending time with you doesn’t make him happy.

The Taurus is the type to avoid conflict when he can and by any means possible, and this includes removing himself from the company of those that have hurt him. So when the Taurus Man stops seeking out your company and doesn’t respond to any messages to confirm a hangout; he is definitely hurt about something that you said or done (even if it wasn’t intentional at all).

4. He is being defensive

#4 can be his bull-ruled temper rising to the surface.

While the Taurus Man is fairly easy-going and can be set in his ways, avoiding conflict and drama at each turn; his bull tendencies do raise their head once his temper is provoked. If this happens? You will find yourself on the receiving end of some defensive behavior when you try to question him about his actions.

Unfortunately, this behavior won’t just be if you are questioning him about his actions regarding an argument or disagreement you both had but he will defend whatever you question or ask him. He will search for things to be defensive about and he will start to question or “bite” back when you ask him the most mundane questions. This is how he hides his hurt – under a layer of defensive attitude.

5. He won’t find your jokes funny

#5 is kind of childish, if we are being honest.

The Taurus Man doesn’t always fight with maturity and he doesn’t always tend to take the higher road when his emotions are hurting. That is when you will notice him lashing out in little ways such as no longer finding your jokes funny or scoffing when you try to break the tension with a well-placed quip.

This behavior shouldn’t last long but it can be a bit tiring when you have to deal with it, especially in the moments where you are trying to diffuse an argument or tension in the household. The best thing to do when the Taurus Man is in this state is to just ignore him and not rise to the bait of his temper or things could escalate beyond what you expected.

6. He will hold a grudge

If the Taurus Man is still holding a grudge, even after you’ve admitted your fault and taken your blame in the disagreement, then this is a sure sign that he is hurt more than you initially believed. Granted, the Taurus Man can hold a grudge over the smallest of slights and this nature is why he tends to shy away from being friendly with people he doesn’t know.

This man will keep all the wrongdoings that people have done (or he’s perceived to have done) in his brain and when he thinks of them? Guaranteed he will experience the anger and hurt all over which brings his grudge to the surface. Childish when the disagreement is minor, understandable when it’s something that is unforgivable by his moral code.

7. He gives you vague answers

#7 is his subtle way of showing you how much he is hurting.

Noticing that the Taurus Man isn’t being open and engaging during conversation like he usually is? This is because he is hurt and while he doesn’t want to lose you completely by withdrawing fully from you – he will show he is hurt by giving you vague answers and avoiding any type of commitment (even if it’s as simple as where you two are going to go out to eat the upcoming weekend).

This is the Taurus Man’s way of showing you that you did hurt him but he is trying to work through it in his own head without any interference. The best course of action to take is to allow him this time and show him that you are sorry, you still deeply care about him and the relationship, and that you are there when he is willing to talk to you again the way he used to.

#8 can be a show of his temper that is covering up the hurt.

When the Taurus Man is hurt by something that you have done or said, he will show off the rarer side of his temper by being impatient and sometimes short with you. He is the type that is suddenly wanting to go right now and do a certain thing this instance and when you aren’t willing or ready? That is when his impatience side comes out so get ready for eye rolls, deep sighs, and muttering under his breath.

The best thing to do is not engage him in this behavior as he is spoiling for an outlet to release some of the hurt and the first target he’ll lock in on is the one he thinks caused the issue in the beginning. Just let him work through it and when he has his impatient moments – tell him to go about his day and you will either catch up or skip this outing.

#9 is where you will find yourself drawing the line and standing up for yourself.

The Taurus Man can take things too far at times, especially in those moments in which he is hurt and feeling wronged by those in his life. This taking it too far can definitely include him becoming hypercritical and judging everything that you say (and do). While the first couple of times you are willing to let it slide because you know at this point he is hurting, it’s not behavior that you will allow to continue for long.

Depending on the severity of the issue that caused him the hurt emotions – this could be his way of either making you hurt the way he is so you can move forward together or it could be his way of pushing you out so that you make a final call on the relationship. You can try to talk this out with the Taurus Man but until he is in more control of his emotions; it won’t go smoothly and could cause more issues.

The Taurus Man can definitely be a complex creature but with a little bit of discussion and understanding, you will be better equipped to gauge his moods. By sharing information with each other and actively working on making the relationship work – not only will you endear yourself to the Taurus Man (who completely appreciates the effort into making your connection a solid one), you will also learn the things that can make the Taurus Man happy, angry, and hurt.