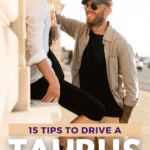 The Taurus Man, at first glance, is not the type of man that you would expect to have a passionate and sensual side. He is stoic, he is quick to stubborn behavior, he is steadfast and dependable, but you don’t meet him and think – he’s the type to go wild in the bedroom or the type to truly crave intimacy.

However, you will be surprised to know that the Taurus Man – is one of the most passionate and sensual star signs in the astrological charts and the one man to bring you to the brink over and over. A man who is as concerned with your pleasure and well-being as he is his own; this man is walking passion.

So how do you turn on the Taurus Man? What makes him take that second glance and say to himself “I need to move this relationship further (for both physical and emotional reasons)?” Well let’s have a little peek into how to turn on a Taurus Man.

#1 shows him that you are invested.

The Taurus Man is a tactile man and one that appreciates when those in his life take the time, and the effort, to show how much he means to them. Surrounding the bedroom with flickering candlelight, making sure the temperature is perfect for minimal (to no) clothing, and having his favorite perfume on his favorite body parts of yours – this shows him that you are invested in your intimacy. This in turn, will make him pant and turn him on as well when he sees his investments reciprocated.

#2 helps him, helps you; making it a win-win

This doesn’t mean act out of character for yourself but instead, work what you have and watch as your own sensuality (and confidence) grows as a result. When you  do start seeing yourself as your Taurus Man does? Then watch out!

3. Show him your Softer Side

#3 brings out the protective side of the Taurus Man

The Taurus Man enjoys and is attracted to confidence but he also enjoys seeing the softer side of his lover. It doesn’t always have to be rough and tumble in the bedroom (don’t get it wrong – he loves these moments) because the Taurus Man also enjoys taking his time and bringing you both to the brink of explosion. He is a sensual lover that wants to make the experience as pleasurable for you as it is him so slow down, enjoy and relish in the moment, and let the passion simmer.

#4 brings you closer together emotionally as well as physically.

Sharing life’s simple pleasures is an enjoyable and bonding experience for any couple. When you share them with the Taurus Man? Especially as foreplay? Well then, you have him hooked. As a natural homebody who would prefer to spend his nights inside, curled up on the couch with his lady love, and basking in harmony – sharing the little things goes a long way with him.

Think PDA while driving home, teasing while cooking supper, and then bringing him an after dinner beverage to enjoy while on the patio.

#5 increases the intimate bond between you both.

The Taurus Man is definitely not someone to jump in bed with the first woman he sees or even the first woman he is attracted to. This man will take his time to explore the pros and cons of embarking on a relationship with you (he doesn’t really “do” one-night stands) before making any physical gestures.

This man is one that knows his mind and will treasure the process of going slow versus the process of speeding through introductions to wind up in bed together. Also, by going slow? You are able to reap the benefits and together, you both can work on growing the intimate bond that helps nurture the relationship outside of the sheets.

6. Talk to him Honestly

#6 puts all cards on the table.

One thing that the Taurus Man will disapprove of and a sure-fire way to ruin the budding intimacy between himself and a romantic partner is to find out that the romantic partner in question hasn’t been upfront and honest with him. This man thrives on honesty and will not be receptive to a woman that plays games, manipulates people’s emotions, and uses tactics to appear as someone they aren’t.

Be upfront and honest with the Taurus Man about your preferences, both in and out of the bedroom. Explain to him why you act a certain way about a certain thing and allow him the same courtesy to explain how he operates. Promise to be a vault and keep the secrets of each other that you are willing to share.

#7 is classy and elegant.

If there is one thing that the Taurus Man isn’t a big fan of – it’s a woman who is crass and over the top with her flirtations. He wants a woman that makes him slightly work for the prize, which in this case, is her affections for a long time. The Taurus Man will respond better to subtle sexiness than he would to someone being completely all over him in a sexual way in public. This man is a homebody, someone who is shy and firm in his beliefs; so engaging in anything more than subtle sexiness with him will backfire.

Think cloying running your foot up his leg under the table, nuzzling into his side while waiting for your seat at a restaurant, and wearing his favorite outfit (or lingerie and letting him know).

8.  Be Touchy-Feely when you Flirt

#8 shows how much a little affection can go a long way.

Tactile to a fault, is the Taurus Man. He enjoys knowing that he is the center of your affections and that you are eager to be in contact with him as much as he is with you. Show him how much you are wanting him by being touchy-feely (without being over-the-top) when you are flirting with him.

Not sure how much to do with the Taurus Man? Think running your fingers through his hair, leaning close to hear what he has to say while placing a hand on his knee/thigh, and scratching the back of his neck while you are driving.

#9 brings you both closer together – both figuratively and literally.

As a deeply passionate and sensual man, the Taurus Man loves nothing more than embarking on a physical connection with his lady love. Foreplay is where he excels and he will gladly take the time to learn your deepest desires and likes in the bedroom. Just remember to repay the flavor and show him that your physical connection is as important to you as it is to him.

10. Show him you Make your Own Money

As a man that is extremely career-oriented and goal-focused; the Taurus Man is used to working hard to earn his achievements and will stop at nothing to bring his goals to fruition. If you can show him that you are the same type of person and someone who is focused on making your own money, creating your own savings, and standing on your own two feet? Well now, be prepared to be swept off them.

This will be insanely sexy to him when he realizes that you aren’t after his wallet but instead, you are after your heart because you have your bills covered and you are, after all – an independent woman who can make her own money; thank you very much!

#11 can be a form of foreplay to the Taurus Man.

A lover of the finer things in life, this man has no issue spending money on only the best once his financial obligations have been met. He is the type of man to seek out beauty in any situation and the type of man to show off his culinary skills, along with his seasoned palette.

Bring this man out for a fine dining experience and he will definitely repay the flavour to you in the interim. The Taurus Man also has no objection to bringing good food into foreplay territory and once his passionate nature takes the reins? Well, let’s just say you might become his plate…and bowl…and glass…and good chance? He won’t be using your typical cutlery.

One of the easiest ways to turn the Taurus Man in your life on is to just simply ask him what he likes. Don’t use assumptions on this man because he prides himself on being authentic to his wants and desires. Intelligent conversation and obvious signs you are crushing on him is a definite turn-on as well so combine the two.

Engage him in a conversation about his favorite subject and engage in a lively debate (just don’t let his stubborn nature irk you!). Then when things start to get physical? Ask him what he likes in the bedroom and out of the bedroom. This shows the Taurus Man that you are invested in this experience and you want to make it great for him as well.

13. Kiss him with Meaning

#13 brings it back to touchy-feely.

Remember how we mentioned that being touchy-feeling while flirting is a major turn-on for the Taurus Man? Well bring that around full circle and go for a full-body contact kiss. Kiss him like you mean it, kiss him like you missed him, and kiss him like he is the oxygen you need. Bring your heart and soul into the kiss, wrap your arms around his neck, and then look out – the sensual Bull that the Taurus Man is hidden under his layers is coming out to play.

This type of kiss shows the Taurus Man just exactly how attractive he is to you and allows him to engage in the moment without consequences. Maybe just not attempt this kiss at his office party as your social interactions might end a little early!

#14 brings out your creative side.

It’s been mentioned a couple of times throughout this post – the Taurus Man is an extremely sensual and passionate beast of man when provoked in the right ways. Show him just how happy he makes you, how much you appreciate the passionate and sensual side of his personality, and also take the reins a little in the bedroom by creating a sensual atmosphere.

Light those candles, dim those lights, and wait for his arrival home wearing your favorite slip of a dress!

15. Have Sincerity and be Genuine

Don’t play games with this man, don’t pretend to be someone you aren’t, and don’t think he won’t see through the ruse – because he will! Be sincere in your interactions with the Taurus Man and invite him to do the same. Be genuine in your reactions to him and if you aren’t jiving with something? Then tell him.

Did you enjoy learning about how to turn your Taurus Man on? He is a simple, down-to-earth man with basic needs who simply wants love, affection, and a goddess in the sheets. Be yourself with him and he will be authentic with you as well!

If you enjoyed this article or you have something else to add, then please leave us a comment below and also hit that share button while there.