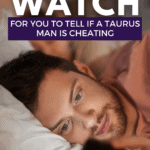 If there is one thing that can be said with regards to the Taurus Man – it’s this: this man will avoid confrontation and conflict at all costs. In saying that, this man wears his heart on his sleeve and will let you know if something is upsetting him through his body language. For example, if the Taurus Man is suddenly quiet and not really paying that much attention to you? It’s a good possibility you hurt him or irritated him in some way but to avoid confrontation; he’ll go quiet.

With that being said – there are just sometimes where a woman’s intuition comes out full force and you start to suspect something more is going on; such as another woman? To ease your mind or to confirm your fears, here are the top 11 signs that a Taurus Man is cheating.

Whenever you look at the personality traits and characteristics as per the astrological signs – one of the most loyal and faithful signs is always Taurus. While those born under the Taurus sign are extremely passionate and sensual people in tune with their inner lust (perks of being governed by Venus); they are also the type to be wholly committed to one person at a time (the stubborn and tenacity of the bull rearing his head). In fact, he will ghost a woman whom he feels isn’t a good fit for him romantically or he will just not take that additional step to avoid confusion.

So, will Taurus Men cheat or, better yet, are those born under the Taurus sign eventually cheat due to their passionate natures? Potentially. While the Taurus Man is not the first one to run and find another warm body at the sign of trouble, it’s not unheard of as there is not one star sign that is 100% faithful. He could cheat when there are other factors, such as displeasure in the relationship at play. If the Taurus Man feels as if he is being unfilled in some way, that this other person is a better fit for him, etc. then the likelihood of him cheating just increases.

The best thing to do is always bring your suspicions and concerns to the Taurus Man in a calm, kind manner as the upfront and straightforward approach is the best when dealing with this stubborn bull.

He doesn’t set out to cheat but ultimately, like any person, he sometimes succumbs to temptation. Does this excuse cheating behaviour? Absolutely not but there are some rationales or reasons as to why the Taurus Man could cheat:

The Taurus Man isn’t the first and won’t be the last to cheat but he is the type to leave the relationship first, if possible, before cheating on his current lady love. This could be because he is a solid and good person at the core, or it could be because he hates confrontation and conflict – which cheating brings a ton of.

#1 could be the first piece of concrete evidence.

Once an open book and now a closed (and locked) door? When the Taurus Man suddenly changes the passwords on not one but all his devices, then it might be time to rouse some suspicion. Typically, the bond between this man and his lover is a strong one that holds no secrets while loyalty is pretty much the main adhesive to stick these two together.

If you once could access your Taurus Man’s devices, use his gaming systems, and browse on his laptop but now you can’t, then it’s worth a conversation, for sure.

2. He’s Losing His Patience with You Quickly

#2 is not his norm when it comes to his personality.

Granted, he has been and always will be a stubborn beast when it comes to what he thinks is right and wrong, but never has he been impatient and petulant with you. If this is now his default mode when talking or hanging out with you; then it’s time to have a serious conversation about his actions. He could be subconsciously hoping you get fed up enough to leave him without him having to reveal any secrets that shouldn’t be kept.

3. He Isn’t Treating You the Same Way

When the Taurus Man suddenly stops treating you like you hung the moon and stars for him but instead treats you as disposable, takes advantage of your love, or no longer comes to you for advice; then it might be time to make some waves. This man is one of the most loving and supportive men when it comes to serious, long-term relationships – so if this has suddenly changed, and you can’t pinpoint why, then it’s time for a serious conversation between you both.

#4 the key word here is unexplained.

Don’t get it wrong, he loves to spend money on his family and friends, once his financial obligations are met of course. This is the man who loves to enjoy the finer things in life without any regrets from fine dining to vacations to excursions, but he always takes his lover with him unless it’s a boy’s trip. This means that if suddenly he is spending money hand over fist without anything to show for it or he can’t explain where that additional x number of dollars went, then he is spending it on things he shouldn’t be.

5. He Prefers to Spend His Time with Friends Rather Than You

While the Taurus Man enjoys his independence even when he is in a committed relationship; he is still the same homebody you met that peers to spend his time cuddling up with his lover. If this was your normal routine on the weekends or how you unwind after work for months but now he is spending all his time with his friends, then he’s thinking of someone or something else other than you; especially when the invitations to join them are in short supply.

6. He Rediscovers How Great You Are

#6 can come across as fake.

After months of barely acknowledging your presence or trying to avoid spending time with generic excuses becoming more common; he suddenly is in awe of you once again. He’s snuggling with you on the couch, he’s asking you to meet him for after dinner drinks or a meal – basically it’s like he just realized how amazing you truly are.

There could be two reasons for this: he is feeling guilty for cheating on you or he was truly working through something that required his full focus.

7. He Deflects Any Suspicions Angrily

When he responds with aggression and anger, if you question what he did the night before or when you question who commented on his recent social media posts – then it’s a good sign that something fishy is going on. Why? Because the Taurus Man hates confrontation and rarely lets his temper get the best of him so for him to be bringing it out at a more frequent pace, red flags and warning signs start to go off in your head.

8. He Has Stopped Wearing or Using Things You Have Bought Him

Does the Taurus Man suddenly wear clothing that you aren’t familiar with? Do you wonder where did he got that shirt and why doesn’t he just wear the one that you bought him just last month? When the Taurus Man is feeling guilty or wants to avoid questions that he can’t answer; he won’t wear clothing or use things that you have purchased for him – even if as recent as a month ago, he couldn’t get enough of it. This is because these objects remind him of you which in turn sparks his guilty conscience.

#9 not his usual quietness but more so than normal.

The Taurus Man is not the biggest chatterbox on the best of days but when you can barely get him to come out of his shell, he doesn’t want to christen any part of the house, and he doesn’t even want to leave the room for an adventure; warning bells start to ding. This withdrawn nature could be the result of his guilty conscience or he is actively trying to determine what course of action to take – end the current relationship with you and try with his lover, or end it with the lover and make it work with his significant other.

10. He’s a Bit Flaky Around the Future

When you are questioning the Taurus Man in regards to your shared future but instead of being his normal self (with goals, a path to achieve those goals, and whatnot), he is being flaky and non-committal; then it might be time to start questioning the status of the relationship. If one minute he was all about the future, you were both going to build together and then the next minute he won’t even commit to a restaurant, then something is going on and it could be that another potential lover has entered the picture.

You can set your watch on the Taurus Man and his schedule. Chiseled in stone and barely changing for anything; the Taurus Man maintains his routine to the core. And then one day, he is changing it up and then the pattern continues to the point that you aren’t even sure when he will be home anymore. This could be because of work related issues, family issues, or he is rearranging his schedule to match the lover he has on the side.

Now that you are armed with the knowledge of how to determine if your Taurus Man is cheating or not; please share this with your fellow lady friends so that they can find out the signs themselves.

Remember, talking to your partner is always the best first step to take when you have suspicion. Do you agree? Let’s talk about it in the comments below.