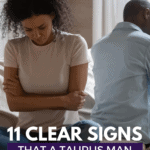 The Taurus Man might be a passionate, steadfast, and all around good person to have in your corner when the chips are down but there is definitely one aspect to his personality that can leave something to be desired – the fact that he absolutely hates conflict and will actually avoid the person who sparks it in his life instead of dealing with it head on.

For example, when the Taurus Man loses interests in a person as a potential mate, lover, and even as a friend – instead of talking to them and having to deal with messy confrontations; he will show pretty clear signs that he’s lost interest and wait for the opposite party to pull the plug on the relationship (potential or not).

11 Signs That A Taurus Man Has Lost Interest

1. He Stops Replying to Texts, Social Media, or Calls

#1 is the one that gets the mind wandering to the fact that he isn’t that interested anymore.

The Taurus Man, once reliable and always ready to make the plans for the weekend two weeks in advance as he doesn’t enjoy surprises, but he loves to experience the finer things in life. Suddenly, he is not answering telephone calls, he isn’t responding to texts, and even though he’s been active on social media – he isn’t reading what you’ve sent.

So, what gives? This is one of his most common ways to let someone know they just aren’t that interested anymore. He might answer after a while but only once he senses you’re moving on and no longer 100% interested.Be kind! Both are passionate to a fault which can make tempers flare unnecessarily. Take steps back when experiencing conflict and go to separate corners to gain control over your emotions.

2. He Looks at Other Women When You are Out

#2 is his way of letting you know he’s looking at other options.

If you are out with your Taurus Man but you catch him constantly looking at another woman (or multiple women) during your outing; then he’s letting you know in a roundabout way that he is pursuing other options. Granted, he could also be partaking in this disrespectful behaviour because he is hoping you will get upset enough to end things between you both before he has to.

This type of behaviour is childish but the stubborn Taurus Man will look at it as showing you that he is over the connection you once had.

3. Stops Doing Things to Help you

#3 is a change in previous behaviour.

Suddenly and out of the blue, your once helpful Taurus Man is no longer helping you with anything. He isn’t helping around the house, he isn’t there for you to bounce ideas off of, and he no longer seems interested in helping you achieve any of your goals – both short and long term ones. This is his way of telling you that he isn’t interested anymore and to move on to a better-suited partner, one that will be there every step of the way to help you with everything you could imagine.

This is a change for a woman to get used to, especially when she was used to her Taurus Man being there to lend a helping hand, even if she didn’t ask for it.

4. He Flakes Out on Plans at the Last Minute

There is nothing worse than making plans with the Taurus Man, or anyone really, only to get excited and looking forward to said plans, and suddenly? Someone flakes out on you. It ruins the excitement, disappoints, and hurts (even if they have a solid excuse). So when heis starting to flake out on plans at the last minute – and remember he is Mr. Dependable, Mr. Steadfast, and Mr. Set-In-His’s-Ways – something is definitely up with him.

Unless he has a valid reason such as illness or family emergency or a work-related crisis arise; this could be his way of telling you that he has lost interest.

5. He Stops Giving You Attention or Affection

#5 can be as simple as not evening a casual touch on the arm while talking.

When he is definitely done with the relationship and he has decided that the interest that initially brought you both together has faded, especially on his behalf, then you will see a distinct change in how he acts towards you. This change comes from the little compliments he once gave you freely has suddenly dried up and the last time you exchanged a loving touch was…maybe last week? Then he is done without telling you to your face that he is.

Remember, the Taurus Man dislikes confrontation so it doesn’t surprise anyone that he would instead avoid it by acting differently enough that you are the one to pull the plug.

6. He Never Compliments you

#6 can be hard on the confidence if left unchecked.

One surefire way to deplete your confidence is when the man you have been seeing (or potentially starting to see) suddenly stops with all the compliments that were once being lavished on you daily. When he(or any astrological sign) does this – it’s definitely a concrete sign that they are no longer interested in you as a sexual or romantic partner.

The Taurus Man will no longer give you compliments because he doesn’t want to give you false hope of where the relationship is going – which is nowhere fast because he’s lost his interest in it progressing beyond what it is at this moment.

7. He Stops Reaching Out

#7 is how he lets you unconsciously know he doesn’t need or want you in his life.

He is strong and dependable but he also loves the feeling of security that he gets when he is with his romantic partner in a committed relationship. He wants that feeling of home and love to surround him at all times as he will draw strength from it. When something is bothering him, he wants his romantic partner to be the one to tell him that it is ok, he is strong, and he will get through this.

The Taurus Man in your life isn’t acting that way and instead he bottles up his problems to bring to trusted family and friends – guaranteed sign he is not interested.

8. He No Longer Includes You in His Plans

#8 is his way of pushing you out of his social circle.

The Taurus Man is the type of romantic partner that wants his loved one by his side when embarking on new adventures or going to his favorite outdoorsy spot. But your invitation to the friend’s weekend in the woods seems to have been lost in the mail. When you question the Taurus Man about it; he claims that he is having his weekend with the “boys” even if they are bringing their significant other as well.

What does this tell you? He isn’t that into you and he doesn’t want you integrating yourself into his social circle.

9. He Lets You Know Through His Body Language

#9 could be glaringly obvious or more a feeling you are picking up on.

The body language of a person can tell you a lot about what they are thinking. If the Taurus Man is holding himself stiffly around you, barely cracks a smile, looks pained and bored in your company, or a combination of these things (as well as others); then he is telling you without words but through actions that he isn’t interested in you as a romantic partner.

He might be interested in you as a friend but he can’t let you gain false hope for progression by acting friendly when previously the interest was of the romantic sort.

When he is losing interest in a person, they will start to lose their kind manner and turn instead to dictating his terms with little to no regard to your feelings. If he is starting to tell you verbally that you aren’t invited, that he isn’t happy, that he doesn’t feel you are compatible – then he is telling you without saying the words that he isn’t interested anymore.

He’ll stop compromising with you and instead state exactly as something is going to be; and if that doesn’t work for you? Then you don’t join or partake in any of the activities planned.

When all else fails for the Taurus Man, then he is going to tell you flat out that it isn’t working, he isn’t interested, and that you both need to move on past this fling. If you aren’t picking up on his other clues and you are still trying to make it work – then he is going to make sure you understand that he isn’t interested anymore in a relationship or growing a relationship with you. When you’ve reached this stage with your Taurus Man? Cut your losses, thank him for the good times, and exit his life without any further drama or confrontation (because doing that could invoke the temper of the Bull he is associated with).

The Taurus Man might look and sound good on paper but as with any human being, he can have his faults. The important thing to remember is that in the case of the Taurus Man losing interest – it’s truly not you, but him.

If you’ve enjoyed learning more about the non-verbal clues that the Taurus man has lost interest in your relationship or you know of some other telltale signs that we failed to mention; then we want to hear from you! Head to the comment section below and leave us a few tidbits then hit the share button if you feel so inclined.