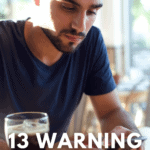 So how exactly can you tell what the Taurus Man is thinking when it comes to a romantic partnership? While it is hard; here are some of the warning signs that a Taurus Man doesn’t like you in that manner.

1. He Doesn’t Ask for Your Opinion

#1 can be quite telling if you understand the personality of the Taurus Man.

He is quite set in his ways and that’s no surprise when you think of how this man’s animal sign is the bull but he also values those who are a permanent fixture in his life above all others and will seek out their advice/opinions on both serious and frivolous things. If you are one of the only ones he doesn’t ask? then your value to the Taurus Man is not exactly as significant or what you might have wanted or hoped for.

He hates and loathes confrontation in any shape or form and will do whatever he can to avoid it. Practical? Not quite. Mature? Not really. True to his nature? 100%.

As mean as it is, the Taurus Man is quite famous for ghosting those he doesn’t want in his life anymore. Rather than risk a possible confrontation in a face-to-face conversation, he would rather reduce the contact between himself and the person until it is non-existent; letting this behavior continue until the other party just gives up and moves on.

When the Taurus Man comes up with any excuse in the book to avoid meeting up or hanging out in person, it’s a pretty big sign that he doesn’t like you in the same manner you are thinking about him.

He is the type to go above and beyond for those he cares about – making plans to meet whenever possible, footing the bill if need be to make things happen, and eagerly making plans whenever the opportunity arises for this known homebody.

4. He Never Asks You to Come Along

#4 is another way of avoiding confrontation.

The Taurus Man doesn’t get out of the house often (by his own choice) but when he does you can guarantee that he is surrounded by his friends and family. A social creature to select people, this man does enjoy the finer things in life, and he will gladly open his wallet to make that happen – once his bills are paid, of course.

Do you never get a coveted invitation to join the Taurus guy on a social outing? Do you instead find out when he posts pictures or updates on social media (or he’s tagged in them by another friend)? Then he isn’t that into you.

5. He Flirts with Others

When the Taurus Man openly flirts with another person right in front of you, that’s one of the biggest signs that he isn’t into you and that he doesn’t like you in the romantic sense. This man is the type to take forever to decide if someone is a good romantic partner for him and will act uninterested in the one he is interested in – so if he is flirting with others right in front of you? Walk away because friends are, at best, the most you’ll ever be.

6. He Won’t Communicate with You Very Often

#6 is closely related to the ghosting prospect.

Quite similar to the concept of ghosting, when the Taurus Man doesn’t like you in the romantic sense but he genuinely doesn’t want to hurt you (and he’s actively trying to avoid confrontation); he will change up the level of communication that you two share. If suddenly he takes all day to respond to a simple text or he dodges the smallest of questions – he is trying to break off the potential relationship before it even gets out of the friendzone or even the acquaintance-zone.

If the Taurus man is giving you nothing but radio silence and this isn’t changing regardless of what you send him, then he is subtly trying to tell you that he doesn’t like you in that way. And quite honestly? He most likely doesn’t even want your friendship. If he did? He would at least reach out from time to time and initiate the contact between you both, even if it is in the most superficial of ways, for example – sending you a funny meme that centers on friendship to let his feelings be known.

No contact at all? Not even a thumbs up to a message? Just cut your losses and let this Taurus Man go.

8. Plans with You are Never Solid

#8 can be annoying, to say the least.

Have you finally cornered the Taurus Man and managed to get him to commit to an outing with you? Perhaps he is finally going to meet you for that happy hour drink that you’ve been asking for. And the day comes – he cancels. When the plans that the Taurus Man makes with you are never solid or written in stone; with him cancelling at every opportunity, then it’s a sure-fire sign that he isn’t that into you. He doesn’t even want to socially be around you.

The Taurus Man is quite steadfast and dependable so for him to act like this? He was put on the spot and didn’t know how (or want to start a confrontation) to say no.

9. He Compares You with Others

#9 can be hard on self-esteem.

If hanging out or conversing with the Taurus Man inevitably leads to him comparing you with other people (or other women, in particular); then going down the road to try and start a relationship is not even worth it. He is trying to get you to walk away from him, so he doesn’t have to be the bad guy and with his stubborn nature. He will maintain that he wasn’t when you bring up how this makes you feel as he was still contacting you.

It’s just hard for any person, woman or not, to be compared to others – so if the potential romantic partner in your life does that? Re-evaluate!

10. His Body Language Says it All

When hanging out with the Taurus Man – does he tend to lean away from you? Does he try and put something between you both, for example another person or a physical object such as a table? When you touch him, even the most casual of touches, does he tend to cringe or shy away? If you are nodding your head yes to any of these questions – then he is telling you with his body language that he doesn’t like you in the romantic sense.

While he might like you as a friend? He’ll shy away from even the most casual of touches to avoid confusion.

11. He Doesn’t Notice You Even if You are in the Same Room

One guaranteed way to make a woman, or any gender, mad is to ignore them when you are in the same room as them. Granted, if you don’t know each other, then this is a different story but if you and the Taurus Man were chatting, hanging out, and then suddenly when you are in the same social setting – he doesn’t know you. Then that’s a pretty big sign that he doesn’t like you in the same way you were starting to like him. Save your time and energy and move on if this behavior is portrayed.

#12 straight forwarded, to the point.

Some Taurus Men tend to head off inevitable confrontations by giving into their base instinct of being upfront and straightforward when it comes to factors in their life. Sometimes, it’s as simple as the Taurus Man looking you in the eyes, or sending you a text, and saying, “I’m sorry but I don’t see you in the romantic sense.”.

That’s it. Done. No fuss. No drama. No show of tempers or confrontations. He’ll simply just tell you it’s not you, it’s him.

13. He Isn’t Concerned About Your Life

When the Taurus Man isn’t concerned about your life – from the small daily things right up to the big crisis moments; he doesn’t see a future with you. He doesn’t see the sense of integrating himself into your life, only to be a non-entity in it a few months from now. He’s not calloused or cold, however, just practical.

Why is this such a big sign? Because this loyal man is always in the corner of his loved ones and is always ready with advice. So, if you don’t rank that, it’s not going to happen.

Do you agree with our warning signs that the Taurus Man isn’t feeling you in the same romantic sense in which you are vibing with him? Do you know of more or other signs? Then tell us in the comments below! And while there, share this article with a simple click of the mouse to let your fellow women know what’s up when it comes to the stubborn, loyal, and passionate Taurus Man.