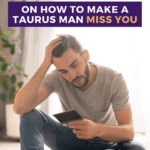 Has your Taurus Man gone away for a business trip or for a weekend with his family/friends and you were unable to go? Are you missing your Taurus Man and you want him to miss you as well? Then you’ve stumbled on the right place as today we are taking a look at how to make the Taurus Man miss you.

While he might be stoic in certain social settings, this passionate lover is all about his lady which is why when he knows you miss him? The feeling is mutual.

What Does it Actually Mean When He Texts, “I miss you.”?

When the Taurus Man texts you out of the blue, or he slips in into a normal conversation that he misses you, then he means exactly that. This man is definitely not the type to play games or beat around the bush – when he is interested in a romantic relationship with you? He will tell you. If he isn’t? Then you’ll know that as well.

So by him saying he misses you and he can’t wait to see you means that you are on his mind, he is trying to keep the lines of communication open, and he is inviting a more intimate conversation then how the weather is wherever he (or yourself) is currently located. These conversations will nurture the bond between you both and increase your intimacy levels while sparking his passionate side as he knows he made that much of an impression on you – he has you missing him as a person and not just what he can provide.

#1 know what you want and need out of the relationship.

The Taurus Man sometimes needs a little nudge when it comes to knowing just how much you care and adore him unless you are the type to constantly tell him. If you aren’t in a serious relationship with him – grow the bond between you both by sending him little things, such as memes, that made you think of him so he knows he has your attention (and that you want his).

Know exactly what you want out of the relationship and go for it.

2. Be Less Available to Make Him Miss You

Being available to the Taurus Man 24/7 won’t give him a chance to miss you and crave the feeling of having a conversation with you. Don’t ignore him completely as this will send the wrong signals but if you are working or out with friends/family; then delay your response until you are able to fully concentrate on the conversation.

Once you can converse without interruption – respond to his messages and start the conversation back up with him missing you a little bit more than before.

Even if you have the time to respond to the Taurus Man at the exact moment he messages you, don’t respond right away. His ideal woman is someone who is stable and confident, so responding as soon as the notification lights up your phone could potentially show him that you are clingy and needy – which are two traits that can make him not miss you at all in his life which is definitely not what you want to happen in the relationship.

#4 can be both sweet and naughty.

Show the Taurus Man just exactly what he is missing by sending him selfies throughout his absence. Doesn’t matter if they are sweet selfies with his favorite television show playing and a caption that reads “really wish you were here to watch this episode with me” or a naughty selfie with his favorite piece of clothing with a caption that reads, “wish you were here to help take this off before bed.”.

The key is to show him what he is missing – what level you take it too is up to you!

The Taurus Man loves to know that your attention is on him, not because he is an attention-grabber, but because he has such a strong bond with those in his life. Play your favorite song that you two share and send him a short video of it. If you are just friends and you want it to be more? Then send it with a caption that states hey – look what is on the radio. If you are in an established relationship, then tap into his passionate side and ask him if he can remember the last time you both listened to this song together and what happened after.

6. Kindle His Fires of Passion

#6 brings out his sensual side.

If you are missing the Taurus Man in your life, then tell him that using a series of messages and images. Kindle his passionate side by telling him all the things you are aching to do together and use this absence to up the foreplay. He will not be mad at receiving these messages – just make sure you do it in the right time frames. Don’t send them while he is working or he is hanging out with friends; send them while he’s alone to make that missing feeling grow a bit stronger.

#7 is using social media to your advantage.

When your Taurus Man posts something on social media during his getaway; fan those missing-you feelings by leaving a flirty and complimentary comment. If you aren’t in an established relationship but you still follow each other on social media? Then post a picture yourself of your amazing meal or the cool project you just finished. Even a meme about missing those around you to spike his curiosity as he’ll want to know if it’s about him or someone else.

8. Have a Signature Scent

#8 appeals to his senses.

Make sure that you have a signature scent and that the Taurus Man knows what that scent is! He’ll start to associate that scent with you and suddenly when he can’t smell it as readily, he will definitely want to rectify that and make sure that it doesn’t happen again. If you are in an established relationship, why not gain some bonus points by spraying the scent on his sleeping shirt? Then you’ll definitely be the last and first thing on his mind.

#9 shows him your attention to detail.

Once you and your Taurus Man have established a routine, such as a particular night for date night, then once that routine is not in place anymore; he will definitely start to miss it and you. These little things are exactly what the Taurus Man needs to show how much you care about him which means once that routine is interrupted, then he will be feeling that void in his life and want you near him to fix it – immediately.

#10 shows him that you are independent and focused.

Show the Taurus Man that you are an independent woman and focused on your own career/goals by being (or acting busy). He doesn’t want the type of woman that sits around and mopes when he isn’t there as he wants a woman whose personality matches his – focused on his long-term and short-term goals. Being busy shows him that you do have a fulfilling life without him in your presence but he’ll just want to make sure he’s there in the future all the more.

11. Try Not to be Involved in Every Single Thing That He Does

Let the Taurus Man miss you for a change by simply not involving yourself in every single thing that he does. Even if the activity is something that you are interested in and would love to do yourself – call up your friends and ask them to partake in it with you. Have lives independent of each other to make the heart grow fonder in periods of absence. Being with an independent woman makes the time spent together just a tad bit sweeter.

Want to lose the Taurus Man in your life before you truly had him? Then make sure you employ tricks to make him miss you or little games that you are hoping he solves in a particular way. This man is not the type to engage in such things and he won’t appreciate being made a fool. If you want the Taurus Man to know you miss him and you are hoping he feels the same way – tell him. He will appreciate the upfront method 1000 times more.

14. Be Independent – Get Him to Miss You

It’s been said numerous times – the Taurus Man is attracted to an independent woman. By showcasing this independence, he is more likely to miss you and miss you being in his orbit. His passionate and sensual side will flare at the thought of having Miss Independent back in his arms and in his bedroom. Let him miss you. Draw him into your orbit instead. Let the similarities between your personalities shine for the best results – showcase how focused you are on your goals.

#15 is quite simple and to the point.

You want the Taurus Man to miss you? Then remind him of what he is missing. Whether those reminders come from simply telling him that you are missing him something fierce, a flirty text saying how much you miss his cuddles while falling asleep, or a picture of his favorite object – let him know that you miss him and remind him of what he has waiting for him upon his return. It will make him all the more eager to get home, that’s for sure.

Missing the Taurus Man and having him missing you doesn’t have to be a bad thing but instead, you can use this to nurture and grow the bond between you both. Keep the lines of communication open and have communication flowing both ways – this is how you make him miss your physical presence and you ease your own ache.

Did you enjoy this list? Then please share it with your peers and while hitting that share button, drop us a comment and let us know what to improve or what is working great!