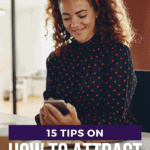 When the Taurus Man is in one of his focused moods or he is having one of his distant, stubborn spurts – then you need to think outside the box to get his attention and increase his attraction. Instead of interrupting him for verbal conversation, why not take the time to send him some flirty text messages to keep the passion going throughout the workday?

The Taurus Man is appreciative of small gestures that show him how much his lady love cares and adores him, so text him that and let him know that you are thinking of him! Not sure how to do this? Wondering what to text a Taurus Man? Then let’s take a look at 15 tips on how to attract the Taurus Man through text.

15 Tips To Attract A Taurus Man Through Text

#1 is the best way to start a text conversation.

Let the Taurus Man know you are thinking about him by engaging him in some light conversation. It won’t do either of you any good at all if you come at him for his behavior through text message and if that is your intention? Then it’s a good chance that he won’t text you back.

Instead, keep the conversation topics light and breezy – the weather, the latest gossip on your favorite television show, etc. Another great tip is to ask him how his day is going and offer support if the answer is less than positive!

#2 can be sweet, can be spicy – you choose the mixture.

Keep the Taurus Man interested by engaging him in some flirty banter. Do you have a favorite thing that he did in the bedroom? Tell him how much you enjoyed it and would love to have a repeat. Compliment him and stroke his ego by telling him how you love his new shirt, haircut, etc.

The beauty of flirty text messages is that you can go as intense or as sweet as you like when it comes to the Taurus Man. His passionate side is going to respond quite well to the boost.

3. Sprinkle in Plenty of Haha’s and LOL’s

#3 shows that while you have a serious side, you can also be a lot of fun.

Text him lighthearted messages that feature a “haha” or a “LOL”. This shows him that you are fun and easy-going, and that the conversations don’t have to be intellectual or deep all the time. Text him a funny meme or joke then wait for his response. You don’t want your text messages coming off like someone who would prefer to be doing anything else than messaging your crush. Let him know when he is being funny and/or cute as the Taurus Man definitely responds well to positive praise.

#4 brings a sense of peace to both parties in the texting conversation.

Going at the Taurus Man with manic messages, one after another after another, will only push him away further as he digs in his heels. This is the man who prefers to do things on his own time and will do things as he sees fit. Trying to reason with or question why he is being distant will only increase that distance in your conversations.

This man can be easily overwhelmed, so seeing a number of messages or the same message over and over coming through will make him retreat. This retreat? Could signal he is having second thoughts about pursuing things further with you.

#5 shows him your sensual side.

Bring the passion into the relationship by being a little flirt in the best way. Don’t be blatant and obvious about your attraction to the Taurus Man but instead retain a little mystery that keeps him guessing. Flirty texts such as “seen such a beautiful spot today that I would love to get you alone in” works a lot better than saying outright that you want him to take you places.

Bonus points for accompanying pictures with your messages (just remember – don’t overwhelm him!). For example, when shopping for a new dress, send him a picture saying “this color would be nice against your blue shirt, wouldn’t it?” Subtle, classy, and sensual; those are the keys.

6. Never Leave Him on Read

#6 is kind of rude, if we are being honest – for any conversation.

Even if the messages are coming at the most inopportune time, don’t leave the Taurus Man on read. This sends a message of not being interested or not investing time into growing your bond. If you can’t respond? Then don’t read it or send him a quick message telling him that you are in the middle of something, such as a meeting. Acknowledge his message and let him know that you will respond as soon as you can.

This method works a lot better than leaving him on read and then his mind starts to wander into dangerous territory. For example, he could think that he is more invested in a relationship than you are so he won’t waste his time.

#7 is a no-go when dealing with the Taurus Man.

Do you want to make the Taurus Man uninterested? Do you want to put him in an uncomfortable position or situation? If yes, then send him that text that will definitely start conflict. The Taurus Man doesn’t handle conflict or confrontation with the best reactions which means that the conflict text will not only make him retreat further into himself, it could mean that you are over before you get off the ground.

The Taurus Man can handle conflict in a more positive way if you bring up your grievance face-to-face, allowing him the opportunity to gauge your emotions and reactions instead of leaving him guessing what you are getting at over a text message.

8. Ask him for Advice

#8 shows him you value his intelligence.

The Taurus Man is the type of man to go above and beyond for those in his life, willing to drop everything and be there for his family/friends. He also prides himself on being intelligent and well-read on a manner of subjects.

This means you can easily ask him for advice regarding anything you can think of. Not sure where to go to eat that evening? Ask the Taurus Man. Not sure if the new insurance plan at work is worth signing up for? Ask him for his opinion. Even if you don’t take his advice – he will be appreciative if you think enough of him to ask.

We just mentioned how the Taurus Man prides himself on his intelligence which means you can have a deep, intelligent conversation with him. Text him a link to a current social event and start a discussion with your opinions and feelings then invite him to do the same.

The Taurus Man doesn’t like being put on the spot so by texting him? You are providing him a chance to formulate his response and sort through his opinions/feelings. Once he responds? Then you have the floor to agree, disagree, or meet in the middle. He wants to be challenged but not in a confrontational way. He enjoys the challenge in an intellectual way!

10. Be Sure your Message has emojis

#10 brings in his favorite things – food and flirting.

Notice that the Taurus Man in your life is always up to try a new dining experience? This is because one of the things that he is passionate about in his life is the food he eats. Enjoying the finer things in life is how the Taurus Man relaxes and enjoys himself while spending money.

The hug emoji shows him that you are playful and affectionate – two things that attract the Taurus Man immensely. He is a tactile person and loves little subtle signs you are thinking of him, wanting him, and crushing on him – the hug emoji kind of sums all those up in one little symbol.

#11 resist the urge to send it again.

You definitely don’t want to send the same message over and over to the Taurus Man or jump from one topic to another by sending multiple messages at one time. This slow and steady man needs time to consider how he will respond to the first one you sent and an interruption in his internal thought process won’t be taken lightly.

If you must send more than one text, then try and keep them all in order with each text concerning the topic at hand. Another good thing to try and remember to do is to apologize for the multiple messages. This courtesy will let the Taurus Man see you in a more positive light.

One surefire way to endear you to the Taurus Man is to show that you are thinking of him throughout the day. Send him a sweet and caring text wishing him a wonderful and productive day in the office.

If you know he is going through a hard time, whether it be because of work, family, friends, or another reason; then offer your help and assistance on anything that he could avail of you for. Being there for him in his time of need feeds his desire for a loving and secure relationship so by showing him your sweet, caring, and softer side? He will start to see you in a long-term light.

#13 brings you into his heart.

The Taurus male is big on respect and big on his accomplishments. Marry the two concepts and be sure to acknowledge how proud you are of him when you know that he has met one of his goals. Encourage him to continue working towards the next one by referencing the accomplishment he just had and acknowledge his work ethic (one thing that he has a lot of pride over!).

Respect towards the Taurus Man and others in your orbit also will go a long way in endearing you to this man, leading the way into his heart and once you’re there? Well you are there for a long time as this man doesn’t do anything partway.

14. Make him Feel in Charge

#14 lets him bring out his protective side.

This man enjoys being in charge and in control of all situations in his life and his romantic life is no exception. Allowing him to take the lead on how the relationship progresses, for example when he is going to ask you out on a proper date, brings out the protective nature in the Taurus Man.

Tell him how much you enjoy his take charge nature and how it takes the pressure off of yourself, allowing yourself to feel happiness and excitement towards the upcoming event instead of anxiety.

Yes, Taurus guys love being in charge and in control but sometimes this stubborn man needs a push in the right direction. He also is attracted to a woman who knows her mind and knows what she wants. A pushover is not a good match for the Taurus guy so if you want to talk to him? Then talk to him – initiate the conversation.

Just remember not to overwhelm or consistently message without giving him the chance to respond as this will turn him off instead of turning him on.

Did you find yourself enjoying this list of 15 tips to attract the Taurus Man through text? How about those ways to ensure that the man in your life will text you back? Do you have any other text message tips for when he doesn’t text back? Then we want to hear from you! Leave us a comment below and help others by sharing this article throughout your social circle.